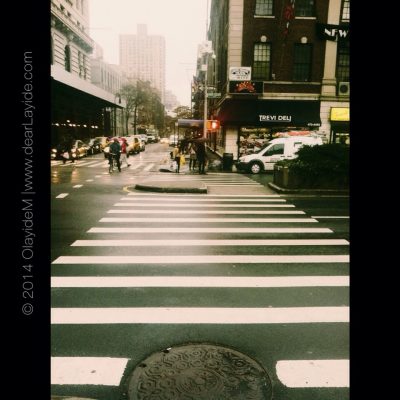 One cold November evening after work I stopped to speak to a homeless lady who usually sits close by my office, at this time our conversations are frequent. Some loose and not so loose change, some coffees, turkey sandwiches and a few chocolate chip muffins, have also been common givings during our frequent catch-up-sessions. However this particular November evening it was really cold and I had my pair of thick, woolly, creamed-coloured H&M gloves in my bag. I had every intention of putting on my very warm gloves, but never got round to actually taking them out of my bag by the time I caught up to Maria sitting at her spot.

With our usual pleasantries exchanged and a brief (yet always the same) Q&A, I offered to buy Maria her usual coffee with one sugar and half & half. As I handed her the coffee I heard God say “give her your gloves.” I laughed Him off, “like yeah right”, and insisted that my body turned in the direction that led to home. I barely made it past the Dunkin’ Donuts (a mere two steps away from Maria’s spot) when I turned back to Maria and offered her my gloves. I dawned on me that I could actually afford to buy a new pair of gloves and she couldn’t. I realised that by the time I walked to the station I would be very warm, and would have to take my gloves off anyway. The reasons as to why I should give Maria my gloves outweighed the joke I thought God was telling. God humbled me. She was grateful.

The enemy was quick to arrive on the scene, having me question if indeed it was God that asked me to give away my thick, woolly, creamed-coloured H&M gloves. I rebuked the thoughts as often as needed, and thanked God for provision. It felt right.

A few weeks later, with the fluctuating temperatures, the weather got cold again and I saw Maria, as I usually do. She didn’t have the gloves on and I was pretty annoyed (but decided not to question her about it). I saw her and greeted her with a half-hearted smile (I  don’t remember if a coffee exchange was involved) – I felt so silly for giving her my gloves. I was upset that God even asked me to do so knowing that she wouldn’t cherish the “gift”.

I had all these thoughts flying in my mind, as to what she could have possibly done with my gloves:

I was annoyed that she was ungrateful and that I was the one left with cold hands. Did she not know that my gloves were of some expense? Did she not know that my gloves had made their way from Europe? [Pride will come up with the dumbest form for defense and claim that it is rational *sigh*]. She insulted my kindness by not using my gloves, she was ungrateful and it hurt me (and left me with cold hands).

After my toddler tantrum, God softly asked, “Layide, so what have you done with the gifts I’ve given you?”

Talk about gobsmacked! The way my jaw dropped and I felt so foolish about my pettiness regarding my thick, woolly, creamed-coloured H&M gloves.

After thinking about the gifts God has blessed me with – which proved to be difficult, because I don’t regard them often – I had to ask for forgiveness.

God had me understand that we’re all blessed with gifts which he has freely given us, but some of us squander our gifts in trades for lesser things. I know for a fact that I substituted my gifts for “fear”, preventing me from using them. I’ve been “Maria” so many times.

As God showed me that I’m just like Maria, in regards to Him, I now pray that God helps me to be more grateful for the things he has given me and to stop exchanging my gifts for things of no importance.

I revisited the idea that Maria could have given the gloves to her son, and it had me thinking:

God gives us gifts to use, but not to enjoy alone, but to share with others. These gifts we do not deserve, are supposed to be experienced and enjoyed by others too.

If Maria did give the gloves to her son, then she sacrificed – the same way God did when he gave us Christ. Have I fully taken time to enjoy and experience the gift of Christ? [At the time of this event, I also had many questions about Christ and His sacrifice, it seemed blurry to me, and understanding that what He did was a gift – THE GIFT – it put me on the right track to re-understanding what Christ is all about].

Our gifts will require sacrifice, but in doing so we acknowledge who God is. Our lives become lives of Thanksgiving.

A life with and about Christ, is one of continuous sacrifice, even if it means giving up your thick, woolly, creamed-coloured H&M gloves.

The Message Version: “And the special gift of ministry you received when I laid hands on you and prayed – keep that ablaze! God doesn’t want us to be shy with His gifts, but BOLD, LOVING and SENSIBLE.”

New International Version: “For this reason I remind you to fan into flame the gift of God, which is in you through the laying of hands. For the Spirit of God gave us does not make us timid, but gives us POWER, LOVE and SELF-DISCIPLINE.”