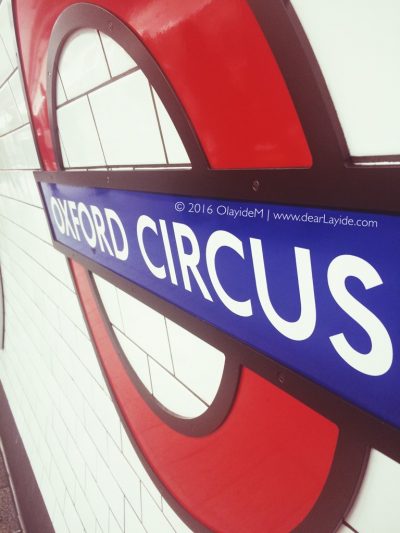 Train stories ~ Short fictional stories inspired by real train commuters and I’ve intentionally not given the characters names. If I see you, I just may turn you into a story.

At 32 he stood tall and confident with his ginger hair slicked back, size nine antique brown brogues on his feet and his expensive fitted lapis-blue suit. Other than his achievements and his job, his appearance was everything to him. He held on tightly to his expensive Knomo black leather laptop bag in his left hand because he was incredibly nervous – rare. If his bag had a pulse it would have died. He had never been nervous about anything ever.

The last time he checked it was 6:04pm now it was 6:05pm apparently time had no regard for him and refused to acknowledge his inner plea for her to come soon.

For the first time in his professional life he had lost focus at work – it appeared that today was a day of firsts for him. For the first time he would [willingly] apologise to her even if it was a year and half later and that’s what made him second-guess himself about meeting her today.

“Surely an apology this far on was too late?” He dismissed the thought by shaking his head as he had done anytime he wanted to cancel the meeting. He was doing the right thing, she needed this and so did he.

He checked for the time – it was 6:05pm. He wanted to scream and shout out an expletive, when he remember he was now a new man (for real this time). He whispered a silent prayer asking God to keep his emotions stable and for the time to be 6:15pm “Now!” – he had just finished a Bible App devotional on faith and learnt that faith can move mountains and right now his mountain was time. He dared to look down on the engraved Armani watch he gifted himself, time had graciously reduced his waiting by one minute. It was then he acknowledged that he was not the commander of time.

So instead he chose to rehearse his apology, and while doing so, and as much as he didn’t want to, he remembered the very reason he was waiting for her. His dad.

He was 11 when his dad spoke words that had shaped the past 21 years of his life. In these 21 years he had broken many hearts and only just noticed the damaged he had caused to others including himself. He wanted to hate his dad for it, but he couldn’t if he wanted to be a better man.

“Look at your mam, she looks after you boys and she looks after me she’s at ‘ome where she belongs. If she starts working she’ll ‘ave these ova broads telling ‘er to skip out on ‘er wifely duties and I can’t ‘ave that. Your poor grand-fava, God rest ‘is soul, would be rolling in ‘is grave if ‘ee knew your mam ‘ad ah job. ‘Eaven forbid.” He stopped to breath mid-speech as if it was an inconvenience rather than a necessity. “Listen ‘ear, a woman must know ‘er place, you tell ‘er ‘ow to dress, what to eat, ‘ow to speak, ‘ow to sleep – you control ‘er. You make ‘er turn out the way you want and if she retaliates show ‘er who the man is!”

At age 11 with his big green eyes open wide, he drank in every word his dad spoke. His 11 year old mind concluded that all those times he heard his dad threaten or call his mum names was because that’s how men showed they were men. He didn’t doubt that his dad was wrong because he had authority, power and money – everything he said and did was right. His dad was always well dressed, with his black hair slicked back. Everywhere his dad went he’d command respect without saying a word. He stood tall and he stood confident. He admired his dad and wanted to be like him in every way possible that’s why he had no reason to question his dad’s ‘wisdom’.

“So when you get yourself a fit bird” his dad continued “showing ‘er who is boss is ‘ow you show ‘er you love ‘er.” Mockingly and with a dark tone his dad chuckled knowing that his sons had heard him.

At age 11, his dad sold him a false idea of manhood but it became the only truth he knew.

In 2016 he was no longer an 11 year old boy sitting across from his dad in their Essex family home, he was now 32 standing at Charing Cross station at 6:13pm doubting she’ll come. All he wanted to do was see her and apologise and tell her that he grew up to believe he could mould, manage and control her to be his ideal woman. He wanted to ask for her forgiveness for treating her like a project and manipulating her rather really loving her. He wanted to thank her too, if she hadn’t been so vocal about her faith in God when she started going to church again (for real this time), he wouldn’t have been the changed man he was today. He had wanted to tell her the good news of how The Good News changed his life. He had been wanting to tell her for the past six months when the change began, but she had warned him not speak to her ever again a year and half ago. His last words to her included words like pathetic, unserious, unstable and unloveable – words he never meant but said in hopes that she’d change. She only ran away from him when he expected her to run towards him.

As carefree as she was she always showed up early to a function, an appointment, a date – for everything, and that’s why at 6:14pm he was now praying to God that there were delays on the Bakerloo line. Even though he knew that wasn’t the reason why she hadn’t arrived yet, “maybe I’ll try this faith-thing again?”

It was 6:15pm and she hadn’t arrived, he was ready to leave. His pride had been shattered, maybe he deserved it after the way he treated her, he didn’t blame her for not coming. Maybe he’ll follow up with a text later to ask if she was ok, “nope you’ll be doing too much, give her time” he thought. With his head down and no longer feeling confident he turned around to leave the station when he heard the words “sorry I’m late.”

One thought on “Story: The Bakerloo Line ~ Oxford Circus to Charing Cross Part 2”