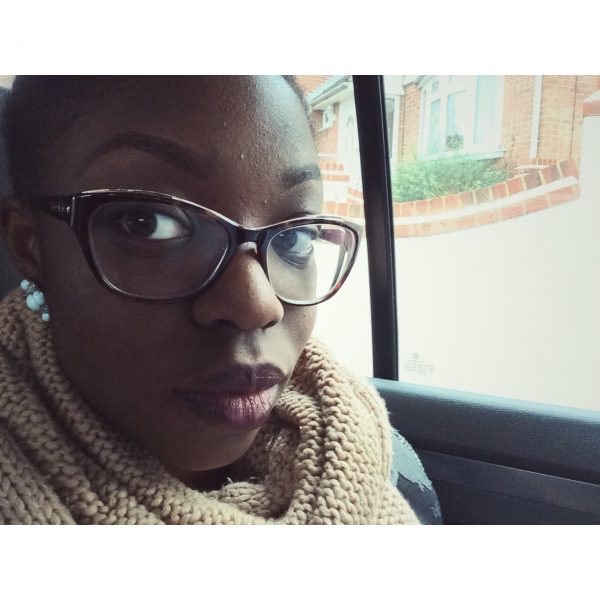 “You have nothing to celebrate because you’re 28+ & Single…” said the unwise fellow, ironically named Solomon. 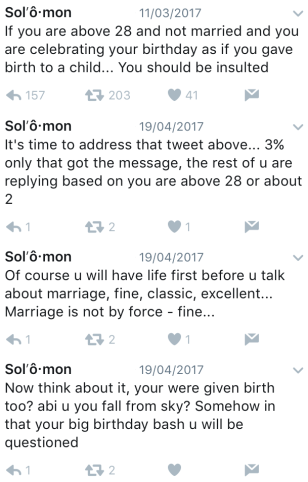 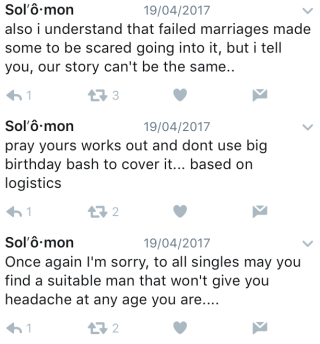 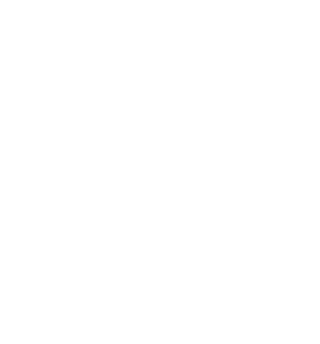 I’m not one to get easily hot and bothered over someone’s misguided opinion, but it just so happened that my hormones were doing the most with my emotions on the day I came across this thread. This thread got me angry and righteously so, because everything about it was TRASH.

My [godly] opinion about marriage and singleness isn’t a secret, so seeing something like this got me angry and got me sad at the realisation that this guy’s thoughts aren’t exclusively his, other people also think this way too.

So what annoyed me?

The whole thread was insensitive and insulting. Insensitve to those really struggling with coming to terms with their singleness and having to committ it to God. The singleness journey isn’t easy, but it isn’t impossible, however it’s unfortunate that people still believe that getting married is a form of “arrival” – marriage will break you before it makes you, it will reveal the true you and the real person of your spouse (I’m told this realisation stage is a tough pill to swallow). The thread was insulting because it dismissed a whole group of people who are happily single and reduced them to incomplete, invalid and unnecessary. Your completeness will never be found in your relationship status. Don’t let anyone lie to you saying that you complete them and don’t utter such words to someone else, you do not have the power to complete anyone, O N L Y! ONLY! GOD DOES!! The coupling of Hollywood Romance and cultural expectations are destroying people out here and it’s not right! It’s not right!

I can’t stress enough that marriage is not the cherry on top of your life thus far. Marriage is a whole other ball game, I have marriage stories for YEARS that I could tell and prove that a wedding and a marriage are two different occasions.

Marriage: An act of joyful [ & tearful] service/sacrifice to each other, with eternity in view, as proof of God’s love & redemption. #Truth💯

Unwise-Solomon’s thought process is the kind of thinking that causes, lack of faith, fear of missing out/anxiety and false-start marriages, all in the name of wanting to be married. And it’s this kind of thinking that has some married people lording it over single people, that marriage is the best thing since egg and agege bread…

Don’t let anyone make you feel unaccomplished because you are single, BUT accomplish much as a single person. Make memories, gain experiences etc. so when your spouse shows up (or when you show up to your spouse), you have much to offer AND these accomplishments and experiences will also set precedent for your expectations in your future spouse. You have nothing stopping you, you’re not a Disney Princess stuck in a far far away castle 🤷🏾‍♀️ so BE 👏🏾 ACTIVE 👏🏾 IN 👏🏾 YOUR 👏🏾 WAIT. IMPORTANTLY, be active in seeking God before all else, the wait with God is an amazing journey. Don’t deprive yourself of the joys and lessons that come from it. (And I use the word “wait” very lightly, because even the word sounds thirsty, but you get what I mean).

Don’t sell yourself short because you’re single, and don’t assume the power of authority because you’re married, by doing so, in both instances, you ridicule God. One status isn’t greater than other, each come with their struggles and celebrations. To think it’s ok to make someone feel bad or unaccomplished for not being married, isn’t acceptable. Christ died for this mess.

Your identity is found in Christ, not your relationship status.

Single or Married, the truth is God has made us much bigger than our relationship statuses, don’t let anyone tell you otherwise and even if their name is Solomon, you are not guaranteed that wisdom will flow forth from their tweets. #NoProverbs.

The Author is capable of writing many [life] books.

Don’t impose your story/journey on another person by insisting it has to be theirs too.
We may not all start the same, or journey the same, but knowing The Author, it can only mean our stories will end with a win.